We will visit the capital of Andalusia, in a bus with panoramic viewing and an on foot tour of the most emblematic places of Seville, Triana, Macarena and the Old Quarter.

A city with great historic value, the monuments and patrimony of this city are almost endless, this is also a large city with a great old quarter, which makes it a valuable city to visit.
Outstanding constructions are the Cathedral, the Giralda Tower, the Real Alcázar, Orange Square, Hercules Avenue, many museums and Palaces. A special mention is made of the Plaza España which is the most important construction of the Expo of 1929 in the Maria Luisa park. Designed by Sevillian architect Anibal Gonzalez, it includes all the historic architectural styles in a large semi-circular space with a radius of 100 meters. The building is located on the edge of the radius and has large logia on the ground floor and has a tower on either end; all made of red brick. In front of it, there is a large semi-circular pond which is crisscrossed by several small bridges. Next to the façade there are several benches which are noteworthy because they have tiles and on the back are the coats of arms of the Spanish provinces.

The Real Alcázar of Seville has been declared Patrimony of Humanity by the UNESCO this is a set of palaces dedicated to hosting different rulers since the Moorish rulers. The various palaces that the Moors built are attached to each other and their styles vary from original Islamic to Gothic or “Mudejar”. Some of these constructions are of the same era as the Alhambra of Granada. The Real Alcázar and the Giralda tower are the most important representations of the Muslim legacy in Seville. After the conquest of the city in 1248 by Ferdinand III, this became the residence of successive Christian monarchs. The gardens where the Reales Alcázares of Seville are located, are also a not to be missed landmark, here you will find beautiful corners for taking pictures and letting the imagination fly. Terraces, exuberant vegetation, fountains, palm trees and orange groves make this site one of the most beautiful areas of the city.

Payment:
Regular bookings will be valid with a confirmed payment.
You have free cancellation rights when cancelling up till 48 hours before schedule.
Bookings made, changed or cancelled within under 48 hours before schedule are not refundable.
Bookings made for private services or for groups of over 6passengers will be valid with payment and express confirmation of the service. This kind of booking has a 7 day cancellation right prior to the service.
Bookings made, changed or cancelled under 7 days prior to the service are not refundable.
Please contact us for any query about your booking and/or payments can be made at: reservas@leisurely.es 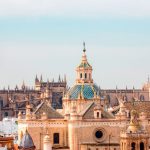