Join us to know the city of the 3 Cultures:
Roman, Muslim and Christian declared a World Heritage Site (UNESCO).

The Caliphal City of Medina Azahara declared Patrimony of Humanity in 2018. This is a Palatine City built by Abd-al Rahman III in 900 A.D. and the romantic version of this was that it was built in the honor of one of his favorite wives, Azahara.
The historic version is that it was built to offer an image of renovated strength and power of the Caliphate, which was usual in medieval times, in which the force of a realm was shown by impacting architectural works.

This city was surrounded by a wall, which had 3 terraces on the upper part and midway is the Alcázar Real and the lower part was for homes and the mosque. With the aim of causing an impression, the Caliph fitted out this city with the richest materials such as violet marble and red marble, precious stones and gold. The craftwork of thousands of men achieved the goal.

Today ruins and already ruins since the wars of Al Andalus of the beginning of the Eleventh Century, the remains are still beautiful. 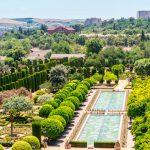